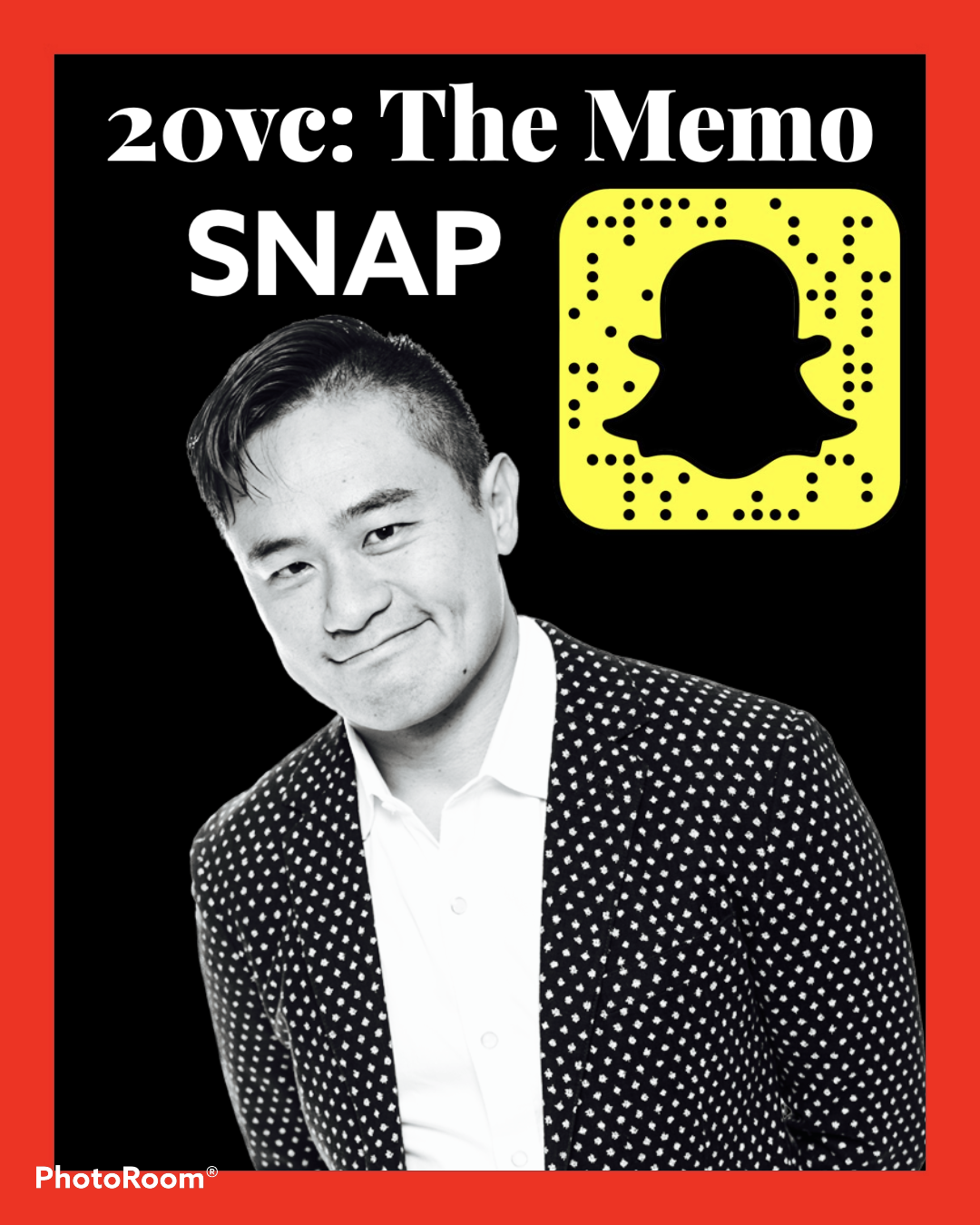 20VC: The Snapchat Memo: Lightspeed’s Jeremy Liew on The 4 Key Elements To Consider When Evaluating A Consumer Social Product, What is Good/Great/World Class For Retention, Usage and Downloads in Consumer Social Today & The Core Insight Development of Evan Spiegel’s That Has Changed Social Products Forever

Jeremy Liew is a Partner @ Lightspeed Venture Partners, one of the leading firms of the last decade with a portfolio including the likes of Affirm, Snapchat (Snap), Mulesoft, Epic Games, Carta and more amazing companies. As for Jeremy, in the past he has led deals and sat on the boards of Snap, Affirm, Blockchain.com and The Honest Company to name a few. Before Lightspeed, Jeremy was with AOL, first as SVP of corporate development and chief of staff to the CEO, and then as general manager of Netscape. Due to his incredible investing success, Jeremy has been featured on the Forbes Midas List multiple times.

In Today’s Episode We Dissect The Snapchat Memo:

I. How Jeremy first learned of Snapchat

How did Jeremy Liew first hear about Evan Spiegel and Snapchat?

“It’s actually kind of a roundabout story. We first heard about Snapchat because one of my partners, Barry Eggers, is a very involved dad. And he noticed that his daughter had started taking weird selfies.”

How did Jeremy manage to get in touch with Evan?

“The challenge was, the website only had an [email protected] email address – that was the only contact info available. So I emailed them, and I never heard back.

“I then looked up Snapchat on LinkedIn, and I couldn’t find any contact information. And I was at a little bit of a loss. I wasn’t getting any responses from the email, there was nothing listed on LinkedIn. So I ended up doing a Whois Lookup to try to find out who had registered the Snapchat URL, and I got an [email protected] email. So I emailed that. Again, I didn’t get any response.”

What was the breakthrough in the end?

“Evan was a student at Stanford. I graduated from Stanford for business school. At that time, Facebook allowed you to message people who were in the same network, and Stanford constituted that. So I messaged him through Facebook, and I finally got a response. But this time, I got a response within five minutes.”

What are the 4 things Jeremy looks for when making an investment in consumer?

Why does Jeremy like to see consumer social companies become part of pop culture?

“Well, one of the things that really has changed around consumer tech is it’s become a lot more about consumer, and a lot less about tech.”

“The television or the music, or the apps that [people] use, perhaps five or ten years later you find a much broader swath of the population using those exact same apps or shopping at the same websites, or watching those same TV shows or following those same artists. And so one of the key questions that we think about when we look at a potential investment is, could this become part of pop culture? And it’s always a positive indicator.”

Why does Jeremy believe that usage with young females is the biggest predictor of future consumer social success?

“Today, if you think about whether it be social networking, apps, messaging, ecommerce, streaming media – it’s all part of pop culture. As much as movies or television or music or dance. And so if you ask yourself, who are the early adopters of pop culture, it tends to be young women.”

What are examples of this?

Did the market evolve the way that Jeremy thought it would?

“We had always thought that this was something that was genuinely spreading through word of mouth, and that is the most compelling way for people to adopt a product. Back in the early days, the only way that you could really friend somebody through Snapchat was in person, because they had to open up their profile page, and you had to form that friendship by literally using the camera to capture their profile. And so we knew that this spread was happening.”

What was a surprise to Jeremy Liew in terms of market evolution?

“One of the things that surprised us a little bit was that [Snapchat] was very strong in Southern California, Northern California, and Georgia, when we first invested, and parts of the South. Within a few months, it had hopped to Norway, and it had built a very, very large following, which had actually transcended the high-school and college-age population, and in fact became the #3 most downloaded app, most popular app, in Norway at that time. So ahead of Instagram, ahead of Facebook, and so forth. And so that’s what I think gave us that early indication that the app was going to be able to break out beyond its high school, college student, initial starting point, not just in the US, but everywhere.”

What did the Snap user-to-install count look like at the time?

How does this compare with others in the consumer social space?

What were Snap’s retention numbers at the time?

How did Snap’s frequency of usage on an individual basis look like?

Across retention, usage and user-to-install, what are the benchmarks for great, good, and average?

IV. The Truth About The Snapchat Founding Team

What unique insight does Jeremy believe that Evan always held for the company and the product?

“One of the things that was so special about Evan, and that I think, has continued to contribute to the success of the company has been that he’s always been able to look at something with fresh eyes, and not iterate over what the current state of the art is, just from first-principles basis.”

How has Jeremy seen Evan change and evolve as a leader?

“I think his maturity as a business leader, as a leader of people, as a manager, as a strategist – although he always had very good strategic instincts – they’ve just continued to grow and evolve and blossom.”

What were some of the big inflection points in Evan’s development?

“So, the feed has always been up until this point, in reverse chronological order, I think largely because that’s what Friendster chose to do. And then Evan comes along. He says, How do you tell stories beginning, middle, end. Now go to social media. How do they tell stories? Reverse chronological order means end, middle, beginning. Well, that doesn’t make any sense. And so he said, we’re going to create a whole new feed of stories, and they’re going to be told in chronological order beginning, middle, end, and make it expire after 24 hours, because that’s the ephemerality that is so core to what Snapchat stood for.”

Who are some unsung heroes from the Snap journey that were transformational?

“Bobby doesn’t get enough credit. From the very beginning, from I think maybe a couple of months in, [Bobby] was thinking about the breakthroughs that had been happening in computer vision and the implications for what that could build.”

“The second one I would say is Imran Khan, who joined as Chief Strategy Officer from Credit Suisse back in around 2013. Imran really helped take a lot of the load off of Evan, and he allowed Evan to focus on product engineering. He took over sales and monetization, ops. He did a lot of the financing work in the time when Snapchat raised a lot of capital.”

20 Growth: Why You Need a Growth Hire Pre Product-Market-Fit? Why Every Company Will Be a Media Company and How To Do It | Communities; What Really Are They? How To Build Them? What Makes The Best? Why Do Many Not Work? | Kieran Flanagan, SVP Marketing @ Hubspot

20VC: Investing Lessons from Fred Wilson and Why Small Funds Outperform Large Funds | Why the Secret to Winning in Venture is Splitting Deals |Learnings From the Biggest Hits and Biggest Losses | Why Anyone That Always Does Their Pro-Rata is Wrong with Mo Koyfman @ Shine Capital

20VC: Raising $60M and Not Touching a Dollar of It; The 3 Decisions That Led to a Cash-Flow Positive Business, Why Not Being Able To Fundraise in the Early Days Can Help Build Your Business & What are the First Things To Break in Scaling Orgs with Sameer Shariff, CEO @ Cambly