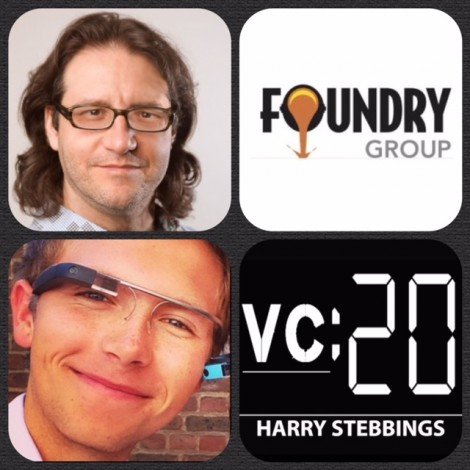 Brad Feld is one of the world’s leading VCs having Co-Founded Foundry Group, Brad has made investments in the likes of Zynga, Makerbot and Fitbit, just to name a few. Brad is also Co-Founder of Techstars, one of the world’s most prominent startup accelerators, whose portfolio companies have raised over $1.3bn in funding. If that wasn’t enough Brad is also a best selling author having co-athoured Venture Deals: Be Smarter Than Your Lawyer and VC, alongside Dick Costolo and Startup Communities: Building An Entrepreneurial Ecosystem In Your Community. In addition to his investing and writing, Brad has been active with several non-profit organizations and currently is chair of the National Center for Women & Information Technology and co-chair of Startup Colorado. Brad is a nationally recognized speaker on the topics of venture capital investing and entrepreneurship and writes the widely read blogs Feld Thoughts, Startup Revolution, and Ask the VC.

1.) How Brad made his move from entrepreneurship to VC and later co-founding, The Foundry Group.

2.) Does Brad agree with the view that it is important for entrepreneurs to fail?

3.) Why did Brad turn Fitbit down on 1st opportunity and what changed the 2nd time?

4.) What gets Brad excited in a startup? What areas are Brad most interested in?

5.) What is the main characteristic that makes the Foundry Group the huge success it is?

1.) Zen And The Art Of Motorcycle Maintenance by Robert Pirsig

As always you can follow Harry, The Twenty Minute VC, Brad and Foundry Group on Twitter here!